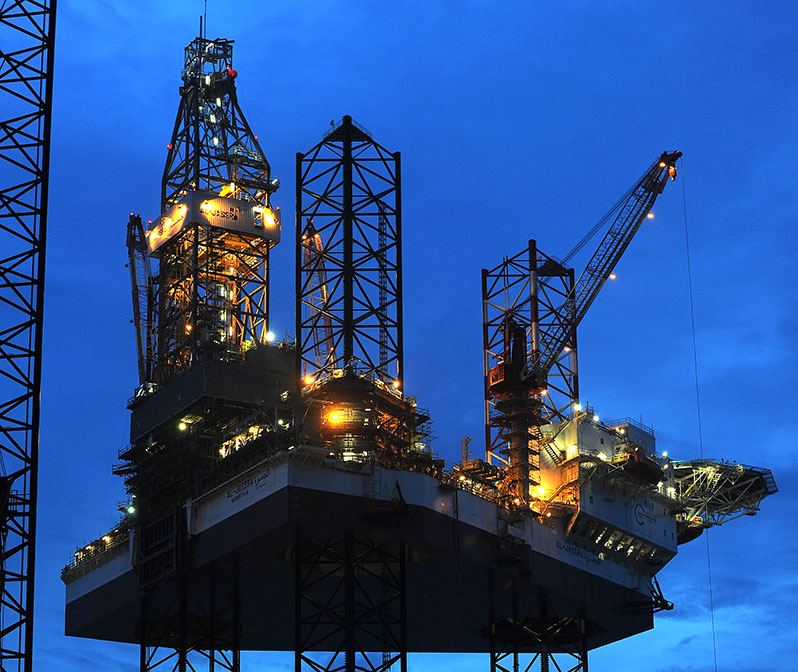 During the first quarter of 2020, GIS continued its path of repositioning its core oil and gas services segments by minimizing cost base, maximizing asset utilization and worked on unlocking further growth opportunities in order to enhance its market share. In non-core segments, the insurance segment continued its efforts to extend its market share and was able to successfully reprice its current contracts, with continued efforts underway to better manage the claims and rationalize the claim exposure to enhance the overall profitability. The catering segment was also able to successfully win new catering and manpower contracts with higher occupancy levels at site camps. All of these achievements reflected in the Group’s improved topline performance, where all the business segments reported growth in revenue, and the Group reported the highest consolidated revenue as compared to any of the previous quarters of 2019.

However, the Group’s bottom line profitability was severely impacted by the insurance segment, as a result of significant unrealized losses reported within its investment portfolio due to the current market volatilities. The unrealized loss reported as of 31 March 2020, amounted to QR 54 million in relation to unprecedented market volatilities, caused due to the negative sentiments prevailed in the market amid dual macro headwinds of oil price decline and economic slowdown since the spread of COVID-19 pandemic. However, these unrealized mark-to-market movements in the investment portfolio is not cash based, instead these movements are only recognized to reflect the market movements in the investment portfolio, which continues to revolve around the market dynamics.

Qatar’s North Filed East Project or NFE (previously known as North Field Project) project has embarked on the drilling campaign for the NFE project, where the first of 80 NFE development wells was spudded on 29 March 2020 by the jack-up rig “GulfDrill Lovanda” (a rig owned by GulfDrill LLC – a QFC registered joint venture between Gulf Drilling International (GDI) and Sea Drill), which is managed and operated by Gulf Drilling International. This rig is part of the six premium jack-up rigs’ fleet, which will take part in the drilling campaign for the NFE project, where the remaining rigs within the fleet are due to kick off operations in the forthcoming periods.

This project will provide many opportunities, going forward, for the Group to capture significant market share in domestic oil and gas services sector, which will drive future gains at GIS. Going forward, GIS is confident on its resilient fundamentals and robust business development plans for each segment that will back the Group to achieve its full potential. The Group has also embarked on the new initiatives to improve the capital and debt structures and this is expected to further improve the overall operational efficiency and financial performance in the near future.

Commenting on the Group’s financial and operational performance for the first quarter of 2020, Sheikh Khalid bin Khalifa Al-Thani, Chairman of the Board of Directors, said: “GIS continued the journey towards repositioning its segments led by the Group’s focus on high utilization of assets, combined with a commitment to expand market share and rationalizing its operating costs, so as to build solid foundations of revenue and profit growth. This strategy has particularly helped all the segments to contribute to the Group’s performance which translated into improved Group revenues. However, the bottom line profitability was impacted by the market volatilities affecting the investment portfolio amid unprecedented dual headwinds of COVID-19 and oil price decline.

In response to limit the spread of COVID-19 pandemic and ensure our operations remained resilient, our subsidiaries implemented several measures to ensure safety of employees and business continuity. Going forward, GIS group companies will continue to strive to maintain market share with an eye on growth, stressing on industry benchmarked cost competiveness, which could drive to add profitability and lead towards shareholder value creation.”

The financial results reflected continued growth in the net income, with exception of the insurance segment. The aviation segment showed strong operational and financial performance owing to the market expansion strategy. Similarly, the drilling segment demonstrated a strong recovery due to rationalization of operating costs and general & administrative expenses. Going forward, the drilling segment will continue to work on identifying further cost saving avenues in the future, where the new joint venture is expected to bring additional growth on the topline.

Operating profits declined by 31%, to reach QR 53 million in Q1-2020, as compared to QR 77 million for the same period last year. The reduction in profitability for the period is mainly attributable to the insurance segment, as a result of temporary unrealized negative mark-to-market movements in the investment portfolio due to global financial markets meltdown, which severely affected the Group’s profitability, and leaves the Group with a negative growth in net earnings base and overshadows the alleviated business performance across all segments.

Revenue for the first quarter, represented an 8% increase compared to the fourth quarter of 2019, on back of Group’s success in capturing growth opportunities, expanding market share and major renewals of contracts across different segments. Net profit reported for the first quarter of 2020 also improved compared to the net profit for the fourth quarter of 2019, mainly due to the improved top line performance and marginally reduced direct costs. On the liquidity front, the closing cash, including short-term investments, stood at QR 1 billion up by QR 94 million. The total debt at Group level stood at QR 4.8 billion as at 31 March 2020.

Restructuring and Refinancing of Debt

GIS is currently in the process of restructuring and refinancing the debt of its wholly owned subsidiary – Gulf Drilling International (GDI), which would allow an opportunity to the Group in terms of optimum sustainable debt and capital levels, along with streamlining the maturity profile.

The total debt subject to restructuring and refinancing will amount up to USD 1.3 billion. Under the new terms, the Group will be optimizing its finance cost. The refinancing exercise will allow the Group to re-adjust its maturity profile for a sustainable future. Underpinned by management business plan, this new debt structure would allow for gradual deleveraging of the Group’s financial position.

With the negotiated lower margins and in the current low-interest rate environment, the refinancing will not only assist the Group in reducing interest cost, but also provide a more optimum and efficient debt structure with greater flexibility to drive forward its subsidiary’s growth plan and support in tapping any new business opportunities.

Measures and Impacts amid COVID-19 outbreak

Several measures have been taken to contain spread of COVID-19 pandemic, to ensure health and safety of manpower and business continuity. The Group believes that the employees are its core assets and therefore the Group is closely monitoring the conditions. Management at each operating entity is continually overseeing the situation with great commitment and dedication, to ensure business continuity and safety.

There is clear uncertainty around factors to identify any costs and revenues impacts of COVID-19 and hence it is too early to forecast the impact at this point of time for the rest of the year. Prior to the COVID-19 outbreak, GIS had already introduced cost-optimization initiatives across of its Group’s subsidiaries, and with the current situation, the Group is proactively and regularly identifying additional opportunities for cost optimization, wherever it arises. Furthermore, capital expenditure programs across the Group is regularly being monitored and assessed for a potential delay, without affecting the quality, safety, and reliability of the operations.

Drilling: The drilling segment witnessed a remarkable improvement compared to last year, as a result of savings on direct costs and lower finance costs. Drilling revenues for the period saw a marginal increase of 2% to reach QR 290 million.

As a result, the segment reduced its net losses by 98% to reach QR 0.4 million for Q1-2020, down from a net loss of QR 28 million for the same period last year. Going forward, taking into account the current distressed oil price environment, GDI would continue to evaluate and optimize Opex and controllable costs in a step to support the bottom line profitability.

Looking ahead, the drilling segment is uniquely placed to unlock solid growth opportunities, mainly due to the North Field expansion project for which GIS’s joint venture has been awarded a contract to provide six premium jack-up rigs, where the jack up rig “GulfDrill Lovanda” has already commenced operations at the end of the quarter, while other jack-up rigs will commence operations in various phases during this year. Moreover, GDI is positioning itself for other domestic and international opportunities, which would not only enhance asset utilization and cash flows, but also provide avenues to diversify. Although, the strategy of international expansion could be affected with delays, due to the current macro situation, amid spread of COVID-19 pandemic.

Insurance: Revenue within the insurance segment rose significantly by QR 40 million, up by 21%, as compared to last year, to reach QR 231 million during the period. Segment revenue grew strongly on the back of successful renewal of policies, along with improved pricing terms on all major accounts within the medical segment, which provided an assurance of continued revenue streams over the year.

The segment net profit, declined notably by QR 62 million as compared to Q1-2019, to reach to a net loss of QR 45 million for the three months period ended 31 March 2020.  Segment net profit was severely impacted by negative unrealized mark-to-market movement in the investment portfolio, as a result of the current market volatility amid COVID 19 outbreak. Furthermore, the decline in profitability was partially offset by lower net claims compared to Q1-2019.

Going forward, the insurance segment would continue its efforts to enhance its market share and to reprice its current contracts in medical business, to better manage the claims and rationalize the claim exposure to enhance the overall segment profitability. The insurance segment is continuing its efforts to tap opportunities in the hardening reinsurance market with expectation of increased premium rates for both local business, as well as, international business, apart from deploying enhancing treaty limits, treaty capacities and alternative proportional treaties.

Aviation: Aviation segmental revenue totaled QR 185 million for the three month period ended 31 March 2020, with an exceptional improvement on Q1-2019 with an increase of QR 45 million, or 32%, which translated into a 63% growth in segment net earnings to reach QR 58 million.

Number of factors contributed to this increase on last year, including continued strength in the domestic oil and gas business, along with revision of contract rates starting from this year, with the addition of 1 new aircraft within the oil and gas operations. Moreover, with the continued success of segment’s proactive business development strategy, resulted in a number of new territories, including contracts in Angola, Oman, Kuwait and South Africa, which have commenced operations since the beginning of the year. In addition, improved operational performance from Turkish subsidiary, Red Star Aviation, added to revenue growth as compared to Q1-2019.

Going forward, the aviation segment will continue to focus on key international markets, which provides opportunities in oil and gas aviation services sector. Also, the segment acquisition of a 49% stake in Air Ocean Maroc in 2019, is set to spur further growth, which is currently looking at opportunities in Morocco, Western Africa and South of Europe.

Catering: The Group’s catering segment witnessed growth in revenues by 19%, to reach QR 135 million during Q1-2020, due to successful expansion of the core industrial catering and manpower contracting services, and higher occupancy level at Mesaieed and Dukhan Camps. This led to significant growth in profits, by 94%, to reach QR 8 million in Q1-2020, compared to the same period last year.

Looking ahead, Qatar’s catering services market is expected to grow at a positive rate through to 2024. This will be mainly driven by the NFE Project and FIFA 2022 World Cup in Qatar, where a high volume of visitors are expected. This will further increase demand for catering and accommodation services in the hospitality sector, where AMWAJ is well positioned to act on these opportunities.

GIS will host an IR earnings call with investors to discuss its first-quarter results, business outlook and other matters on Wednesday, 6 May 2020 at 1:30 p.m. Doha Time. The IR presentation that accompanies the conference call will be posted on the publications page of GIS’s website.